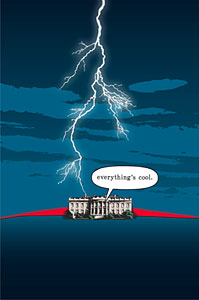 Everything’s Cool (Directors: Daniel B. Gold and Judith Helfand, USA, 2007): These directors scored a hit a few years ago with Blue Vinyl, about the harmful effects of PVCs. This time, they turn their attention to global warming, maintaining their “toxic comedy” approach. This film is like a hip companion piece to An Inconvenient Truth, bringing some humour and aiming at a younger audience.

We meet a variety of interesting characters in the war on climate change, including Bish Neuhauser, a ski resort snow groomer who embarks on a journey to convert his 1975 Mercedes to run on vegetable oil, and Rick Piltz, a former White House staffer turned environmental whistle-blower. There are several other personal stories weaved into the narrative, and taken together, they give us a good picture of where we are in the fight against climate change.

I liked the attitude of this film, how it tried to present the positive side of the struggle. As environmental bad boys Michael Shellenberger and Ted Nordhaus pointed out, Martin Luther King didn’t give a speech entitled “I Have A Nightmare,” but that is just what the environmental movement has been doing for the past thirty years, with no real success. By focussing on the positive aspects of change (ie. the millions of new jobs and businesses that will be created by innovative entrepreneurs), we can move forward without being burdened by liberal guilt. In this respect, I’d highly recommend Alex Steffen’s book Worldchanging which is packed with innovative ideas and examples.