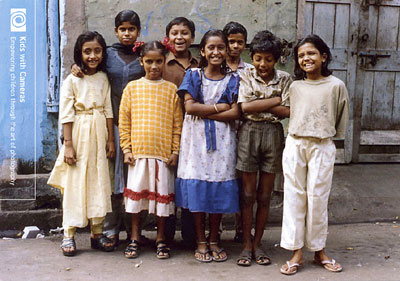 On Tuesday night, Brooke and I went to a screening of Born Into Brothels, which has been nominated for an Oscar in the Best Documentary category.

Photographer Zana Briski has been documenting the lives of prostitutes in Calcutta’s red light district since 1997, and became very interested in the lives of the children there. Most of them have very few prospects and many of the girls are expected to follow their mothers into the business. She began teaching the kids photography and then decided to document their work and lives in a film. The result is stunning, heartbreaking and hopeful at the same time. The images themselves are beautiful and the children’s charisma and real talent jump from the screen. The best part of this film is that it is actually helping to change the lives of its subjects. Briski started Kids With Cameras, a non-profit organization which is selling books and prints of the children’s photographs to fund their educations. The project is so successful that it’s being expanded to several sites, including Haiti, Cairo and Jerusalem, and a school is being built in Calcutta with the proceeds.

Don’t miss this film if you get a chance to see it. Even if you can’t see the film, visit the website and have a look at the images. And please, consider helping.

This entry was posted in Documentaries. Bookmark the permalink.