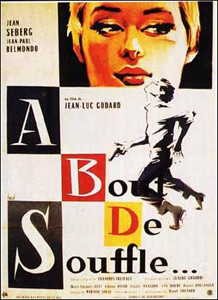 Brooke and I saw Jean-Luc Godard’s Breathless (À bout de souffle) (1960) the other night. It was my first time seeing it, though Brooke has seen it several times before, and says it’s one of her favourite films. Frankly, I had mixed feelings (though I gave it an 8 on IMDB). Some people can immediately dissect a film into its parts and can expound at length on the editing, the cinematography, the sound design, and lots of other “technical” aspects of the movie. I’ve never been able to do that, at least not upon my first viewing. I guess I have to ingest the whole before I can talk about any of the parts. And for me, the whole was somewhat unsatisfying, even disturbing.

I tried to distance myself from the obvious charms of the movie: Paris in the Sixties, exciting “French New Wave” flourishes like jump-cuts, the gorgeous Jean Seberg. And what I found was a film about two people with no souls. Michel and Patricia are completely amoral and aimless, and I could find no sympathy for them. This always makes watching a film difficult for me. And even though Brooke grudgingly agreed with me, it was still clear that she loves the film and I, well, not so much.

I was struggling to figure out whether it was just me being contrary, so I grabbed Pauline Kael’s book For Keeps off our bookshelf. Imagine my relief when I read:

“What sneaks up on you in Breathless is that the engagingly coy young hood with his loose, random grace and the impervious, passively butch American girl are as shallow and empty as the shiny young faces you see in sports cars and in suburban supermarkets, and in newspapers after unmotivated, pointless crimes. And you’re left with the horrible suspicion that this is a new race, bred in chaos, accepting chaos as natural, and not caring one way or another about it or anything else…The characters in Breathless are casual, carefree moral idiots.”

I think seeing the film for the first time at the age of 39 has a lot to do with it. If I’d seen it twenty years ago, I may not have suspected that the characters are poseurs, that even the filmmaker may be a bit of a poseur. I might have mistaken their chilling soullessness for “cool” and tried to imitate it.

When I see Breathless again (and I think it is worthy of another viewing), I certainly will pay more attention to the revolutionary camerawork and editing. With the moral vacuum at the heart of the film now recognized and named, that seems to be the only place left I’d want to look.