Last night we watched Picnic at Hanging Rock (1975), one of director Peter Weir’s first films. It’s a strangle little film, about a group of Australian schoolgirls who disappear while on a picnic at a rock formation on Valentine’s Day, 1900. The first part of the film, before the disappearance, is charged with expectation. There’s an eerie feeling, but also a sort of sexual tension (it is the Victorian era, after all) that’s really powerful. It’s not a suspense or mystery film in the usual sense, and you never really know what happened, but if you enjoy creepy films, you might want to check it out. Peter Weir went on to direct lots of successful Hollywood films, including The Year of Living Dangerously (1982), Dead Poets Society (1987), and The Truman Show (1998). 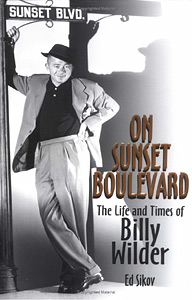 In other film news, today would have been Billy Wilder’s 96th birthday. I’m currently reading On Sunset Boulevard: The Life and Times of Billy Wilder, by Ed Sikov, and Billy was certainly a fascinating and brilliant man.

And tonight, our little film group will be screening The Sweet Smell of Success (1957), starring Burt Lancaster and Tony Curtis. Being a fan of great writing, I’m looking forward to hearing all of the great lines in this one. In Barry Levinson’s great movie Diner (1982), set around the same time, there’s a character who walks around only speaking in quotes from this film.